Thomas Backlund, having done Masters in Bio Technology in 2009, with a new goal in his Life left a well-paying job and his Apartment and went on to live in a Swedish forest to Code. Ohh Yes, He left everything, for the sake of dedicating the complete time to his new startup and promised himself not to be back until he had completed every single module of his venture.

Blockie.io is Thomas’s startup, Basic idea is to make the back-end development of IoT(Internet of Things) accessible to every human and he wants everyone to learn this because he believes that the future of mankind is going to be highly affected by the Technology, and the Software Engineers are going to rule the place. Since advent of the Techno Hub has been revolutionizing the World, and not a single person has been left untouched, through his initiative he wants to spread this idea and make people more aware of the changing things and make software development more than just a collection a gibberish symbols. He wants to develop and bring out best out of logical minds of people.

A Coder has a lot of peculiar behavioral pattern, mostly spending time with their personal devices like laptops and mobile phones, they do tend to become introvert. Myself being a CS Student can completely relate to it. But this kind of commitment to work requires a lot of mental strength. Every single line of code requires keen observation and research because that one line could completely crash your project or it could add worth to it, maybe that is the reason why coders are given so many advantages, since today such software have become lifeline and people developing it need lot of patience to sit through the complete code to see their finalized product. Before getting into the woods, Thomas had a well build background in the Software community, but his project demanded him to be more thorough pushing him to take a step further and leave everything for a cause.

Backland’s venture is like a software solution to the ecological society. So when did it all started? And how and what motivated him to be there? That day when he must have decided that he going to leave all the pleasure of the town along with sacrificing the anytime plus anywhere available food and uninterrupted services of everything that he required must have been really tough, but he quotes that something inside him inspired him to take this step, and that fire within him had no stopping, he was firm and very straight with his goals and he knew what he was going to do is going to inspire a generation of coders to come.

Basic necessities, such as food, shelter, water and most important ELECTRICITY, all these he was managing through some or other ways. He carried with him Solar panels which sucked the dedicated light of the sun to produce electricity which was majorly required to charge his laptops and other devices, Panels did the work to an extend but still he had to keep things on Power Saving modes which was the only way to get the laptop working the whole long day.

Talking about shelter, he lived in his tent and drank water from the river which flowed right ahead of where he had set his hut. About food, not having many options he mostly got away with fish which he got from the river and he had to cook , and clearly with this kind of life style its’ definitely not easy to survive alone. Plus he had to deal with all the mosquitoes around the area which wanted to bite the only human there and squeeze as much blood from his veins. He had solutions for the mosquitoes, though about everything else it was difficult to deal for him. During his initial days, being all pumped up he worked and worked a lot but eventually as the day passed he realized something strange happening to his body, his body was not supporting him, he became weak and used to vomit. He used to vomit like 4-5 times a day and this schedule was not working well for his build but his Startup even after so much of difficulty was going on, he was working hard changing his positions 2 times a week , he made the best out of every single day. There were days when he used to just feel so dizzy and alone, becoming completely unconscious for hours, but all this didn’t demotivate him, it further pulled him, whenever he came back to consciousness, even though alone he felt no pain inside, he felt more Alive, he was living his dream, in a way he wanted to to, doing something he loves and is best at and at a place where no one would ever even think of disturbing him. This experience had made him really philosophical, having so much time in the lapse of nature, observing the morning and enjoying the evening he was changing and this is one experience he always shares with everyone. 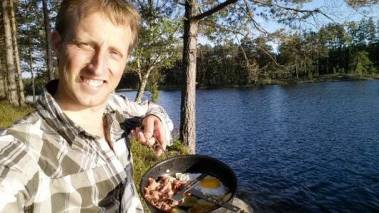 Blockie has started an initiative named IoT -Anti Poaching. One of the most intriguing social issues, which is might start as small local problem but ultimately results in extinction of species. He believes that his cheap technology can reduce poaching activities, through his software one could directly upload an encountered poaching activity on Blockie cloud and hence it will be send to subsequent stations where steps could be taken against such people. This is surely Refreshing. Presently his software is up and ready and he is working with a small but dedicated and hardworking team who share the same vigor as him.

Experience is not something which is to be memorized, but something which one can never forget. Experience is Wisdom. It brings inner bliss and enlightens the person. Most of the computer programmers around the world do need spirituality in their life, the reason being that their lives have become so monotonous with the same things incrementing in “for” loops, that they need a “break” statement, to come back to their “static” state. Being lost, confused and have no purpose, it’s important not just for the Programmers but for everyone out their to change. To change the atmosphere around and surround yourself with things which you makes you happy and brings you closer to who you are. Even though going to forest to code might seem to be a really absurd idea, but its’ this experience made him more efficient. Facing all the challenges he learned and conquered his biggest fears which made him a much better human being.

This story was not just for the Programmers but everyone out there who want to do something, had a definite vision. I’ll suggest them to follow it and work hard for it just like Thomas did. No you don’t need to go to the forest though, but you can create your own space where you manage yourself and your activity and apart from your routine work you completely immerse into your idea and work on it. Thomas you are an inspiration to coders of this age truly, this one’s dedicated to you 🙂

2 thoughts on “A Reclusive Coder”